Careena is a career guidance chatbot our team designed with the purpose of providing career advice and suggestions for first year pre-med students.  We applied user research, affinity mapping, conversation mapping, and prototyping for this project.

My Role On The Team

As the UX Researcher and Information Architect on the team, my responsibilities were as follows:

​Making the right career choice can be a source of anxiety for a lot college students early on. A common theme we found within the research papers on the psychology of career decision making was that career indecisiveness was linked by three factors: low self-confidence, high anxiety, and the dependency of others. 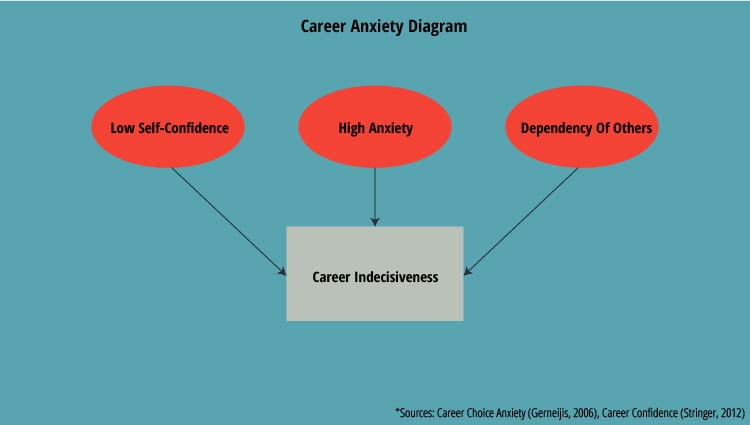 Flowchart illustrates the factors that lead to career indecisiveness

This is especially the case for many first year students who are on the pre-med track with intentions of going to medical school and becoming a doctor. The data below suggests that the track to getting into medical school is one that is very rigorous and competitive with no guarantee of getting accepted the first time around. 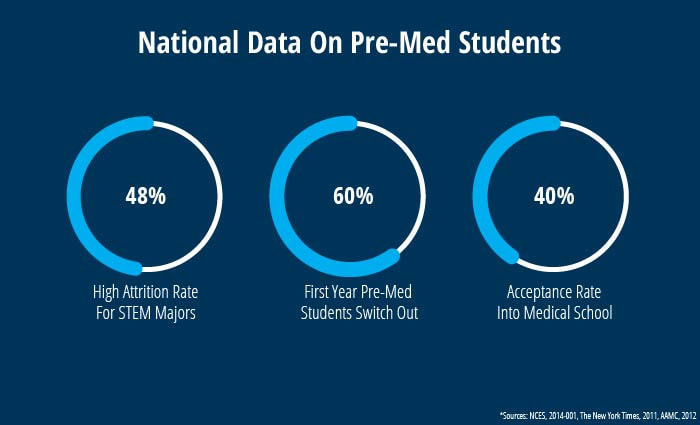 Once we had a general understanding of the scope of the problem, our first step was conducting discovery interviews with the freshman pre-med students. The reason behind conducting the user interviews was so that we could capture the behavioral nuances and sentiments for their motives behind pursuing the Pre-Med track.
​​
Our big research questions for the freshman pre-med students were as follows:
Using these big research questions as a guide, we designed specific questions centered around such factors. The recruitment and interview process was as follows:  ​ 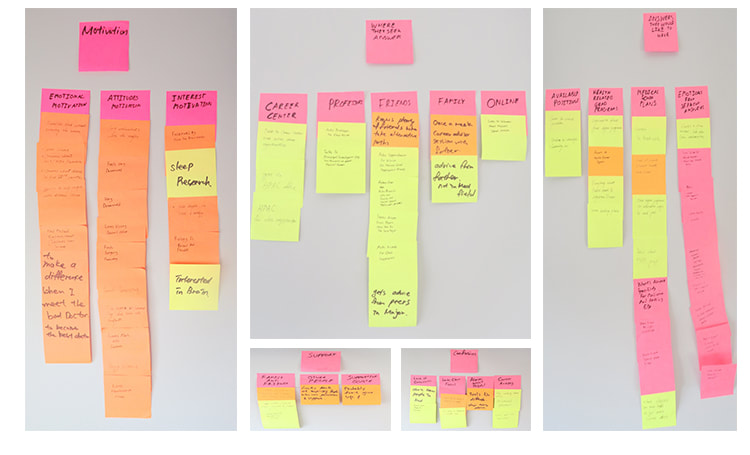 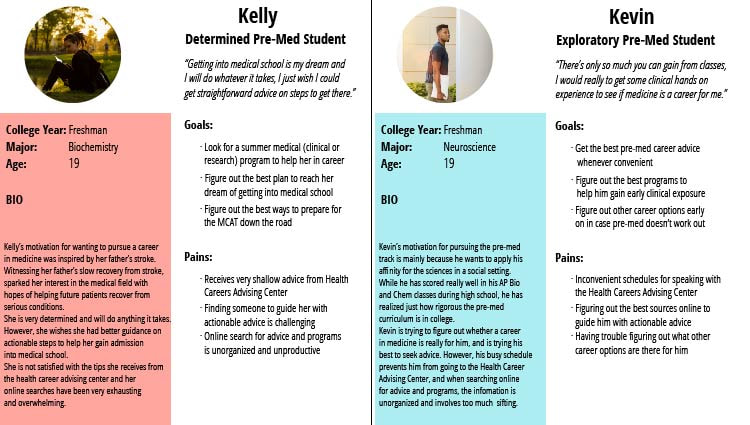 Two of our personas: Kelly and Kevin
While there were differences in motivation for pursuing the pre-med track between Kelly and Kevin, there were some common patterns in what they expected out of the advice received as follows:These insights served as the basis for our approach to designing our solution.

The current situation for seeking out advice involved going through multiple websites and talking to multiple people. This process was very exhausting for Kelly and Kevin who wanted absolute, straightforward answers to reaching their goals.
That's when we thought: That's when we decided to explore the concept of a conversational UI, where the user would interact with an intelligent chatbot in an interface akin to an instant messenger. Since our app was about career advising, we decided to name the chatbot, Careena.

Due to the scope of the project, we decided it was best to focus on one scenario for the final final prototype. We decided to focus our tips around convincing Kevin and Kelly to consider shadowing for a clinic during their first summer.
The biggest challenge was designing how the user would proceed through the conversations. To work around the limitations of AI, we designed a choice architecture that was akin to text-based adventure games, where the user would select an option within the conversation to proceed through a path.
We had some rules when designing the layout of the content as follows: 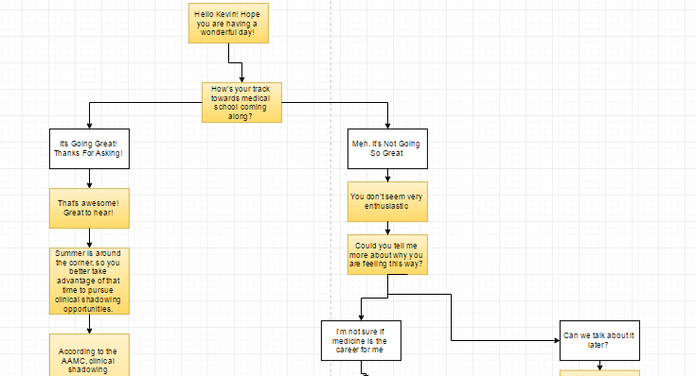 Sample of the conversation map of Careena

Working closely with our UX/UI Designer on the team, we iterated on the layout of the interface for Careena. Taking inspiration from other messenger apps and chatbot interfaces. 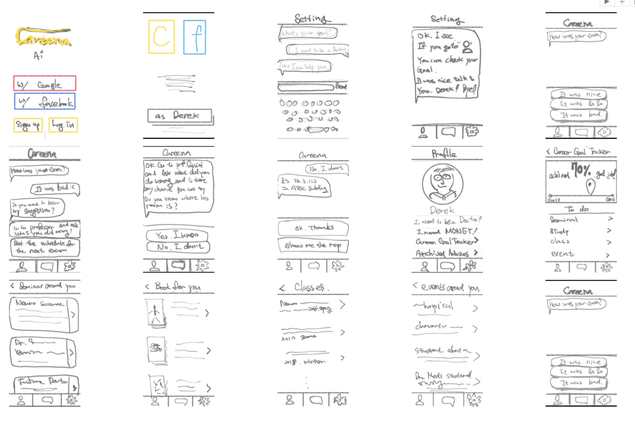 Early sketches by Derek Han
​When it was time to start creating the final version of the prototype with the scenario, to make it easier for my teammate, I created a sample sketch to illustrate how the interaction would work for guidance. 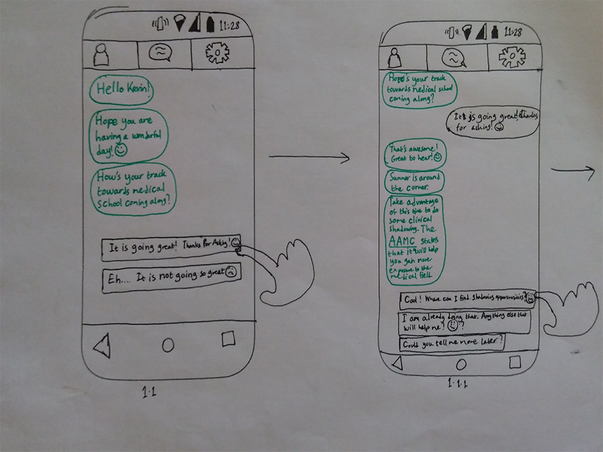 Sample sketch of the interaction design for Careena

​Final Visual Design Of The App

When it came to the visual design of the app, we wanted a color palette that primed users to feel optimistic and hopeful about their future. Our visual designer, experimented with various color palettes, but in the end we decided on a yellow and white color scheme was the best for the UI. Yellow is a color that represents optimism and hope which naturally fit with the app's tone in assisting user's with career guidance. ​ 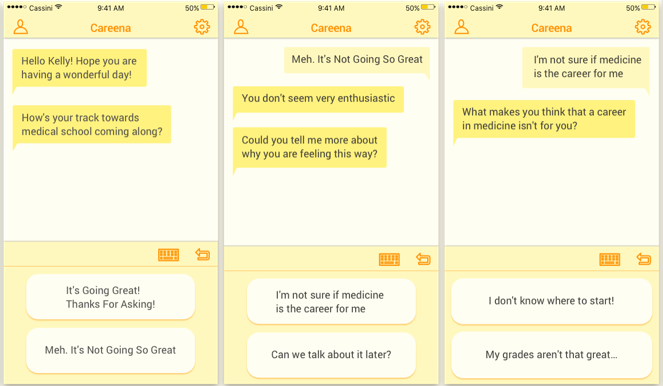 Final visual design of the app by Derek Han

We decided to conduct some usability tests to see if we were heading towards the right track with our design decisions. We tested the following:
Due to the scope of the project, we only managed to conduct two usability tests. However, in spite of the small sample size, we were provided with great feedback in regards to the app's flow and functionality. ​

​While the app's flow and functionality was well received thus far, there is still more to explore. In the future, we're hoping to experiment with the following:
Acknowledgments: This project was conducted at The University of Texas at Dallas under faculty guidance by Cassini Nazir. This project was in collaboration with Derek Han and Yan Su. Visual UI Designs by Derek Han and photographs from interview by Yan Su.
Proudly powered by Weebly